Editor’s Note: In this story, the phrase “young folx” is used to describe Stay True members, as it is the term they use to define themselves. The word “folx” is used instead of “folks” to represent multiple genders and identities.

Founded in 2008 by Phillip Lanzarotta and Nir Saar, Stay True Philadelphia, a youth-led organization in Kensington, mentors and empowers youth to realize their potential and follow their own path. As the group anticipates the release of its self-produced documentary series, they look back on their history and growth.

Through Stay True’s programs, young folx engage with other community organizations like Attic Youth Center and Philadelphia’s Magic Gardens to perform fundraisers and volunteer work. A few years ago, participants volunteered to take care of animals with the Pennsylvania SPCA. Stay True members also work on beautification and community art projects, such as the completion of the “Heart of the City” mural on the side of the Dollar General building on Allegheny Avenue and Amber Street in 2014.

According to its members, Stay True gives Philly youth the opportunity to break ageist norms by encouraging them to become leaders and run projects.

When asked about the importance of building the youth’s autonomy, Lanzarotta said many adults who volunteer expect to do the majority of the teaching, but afterward, they realize they learned just as much from the youth.

“Every single time, without fail, when it’s done … They say, ‘Wow, those kids are amazing, they inspired me,’” Lanzarotta said of the adult volunteers.

One of Stay True’s goals is to support and grow youth leadership, he added.

Now, the young folx at Stay True are creating their own documentary series. In it, they discuss street harassment, police brutality, gun violence, and racism in sports.

“We kind of looked at this as storytelling,” said Moore. “How do we tell stories? What is your message? What is the impact you’re hoping to have?”

For most group members, this project is their first exposure to photography and film-making. So, Daisie Cardona, Stay True’s leadership intern and a former youth member with a background in film and photography, helps guide the group. Cardona and the rest of the collective leadership used music, art, and discussions to inspire the young folx as they came up with the series’ topics and interview questions.

“We will spend two to three hours just talking about Walter Wallace Jr. and the different forms of police brutality or street harassment, or who we should interview and why,” said Larry Bodhuin, another member of Stay True’s collective leadership.

To learn more about the documentary series from the creators, Kensington Voice talked to the Stay True Philly youth working on the project. Here are their responses (lightly edited for clarity and shortness) below:

The process of making this series has been a fun but struggling process due to COVID-19. It’s been slow. But we have gotten a lot of good responses. I believe that when it’s finally released, it’ll feel like a lot of pressure is gone.

My hopes for the documentary are that people will understand the meaning behind each part, i.e., the work that the youth are putting in to make a change, the true issues of our city, and the groups that are working to fix it.

The process of making this documentary for me was very slow. It felt very slow because we couldn’t get too many people to talk to, but after a while, it started to pick up. We had two interviews a month, one interview after the other, and it just felt like it was going somewhere. I think the documentary will feel very beautiful in the way that it shows that people are really thinking about these topics and people are willing to talk about these topics for a better future.

My hopes for this documentary, in terms of how [viewers] perceive this, are that people will be more informed of police brutality and the effect that it has on people in the community and also have police realize the effect that they have on people.

Before we were brainstorming ideas for our topics for the documentary, I had been catcalled by a man on the street. And when I was asked what my topic should be, I thought I should bring awareness to an issue that me and a lot of other women go through.

The process of making the documentary took a lot of emails, brainstorming, and question writing. I also have social anxiety, so doing interviews was very scary for me, but doing it so often has made me more confident in my abilities. And I know it’ll be a relief to see it all come together. I am already very proud of everyone’s efforts on their parts of the documentary, so I know it’s going to feel amazing when it’s done.

When people watch the documentary, I want them to feel proud that someone is shining a light on all the issues that people don’t really pay attention to in Philly, and to the people who aren’t from Philly, I want them to know what it’s like growing up through these struggles daily, and hopefully, one day, these issues will be no more.

I felt pretty confident in the process of making the documentary, and I felt a little scared when starting interviews. I was nervous that I was going to get tongue-twisted. But I felt confident that people would give me good answers and resources for intervening in gun violence. We are working to get in touch with [councilmembers] like Kenyatta Johnson who works with youth on issues of gun violence. When it’s released, I will feel relieved and accomplished and happy that I got the information out to the public.

What I hope people will take from my documentary is that there is a bigger problem with gun violence. They will learn that it’s not a simple problem with a simple solution, but it needs to stop.

The process of making the documentary was different than what I thought in the beginning. It was very exciting and easy. After a couple months, it started to get a little boring because we weren’t getting emails back or interviews weren’t being scheduled, but then it started getting exciting and fun again. I think it’ll be very exciting to see all the hard work we’ve put into the documentary coming together and to life. I’m looking forward to it.

I hope people want to make a change after they see our documentary. I hope they see what we are talking about and how it affects people and want to get up and do something about it.

Like other Stay True members, Smith’s personal experience with his topic impacted the documentary’s focus. Several years ago, while Smith and his football team of mostly Black student athletes were playing against a team of white student athletes, he experienced unfair penalties from white referees and racial tension.

“It was a rough, hard game,” Smith said. “We didn’t know what was going on. The coaches didn’t want to tell us because they didn’t want us to feel any type of way.”

I chose racism in sports because I felt like I want sports to be a fair game, and I play football. As a Black male, I know it’s already hard. If I want to keep playing, I’m gonna end up seeing these things, and I just want to prevent it from happening and get racism out of sports so it can be a fair game all around.

It’s been a slow and hard process. Because documentaries do take time, you actually have to put the work in; you actually have to push. Because if you don’t, it just won’t happen. But, if you keep pushing, you ask your friends, and they help you find people and stuff like that, then it can be maybe still slow, but you’ll figure it out. And your work will probably get out to the world.

I don’t know [how I’ll feel]. Maybe a little cringy? I don’t know. I look back at old videos and think, “That was so cringy.” So I don’t know. Future me may think so.

Well, to be honest with you, there’s always gonna be people who hate. So, you shouldn’t really care what other people say unless it’s positive. My mom always told me that if you don’t have anything good to say, don’t say anything at all. So, don’t worry about what other people say. Keep striving and keep doing you.

Stay True’s documentary series is expected to be released in Fall 2021.

Noah White, a member of Stay True’s collective leadership, has focused more on how the project will affect the young folx at Stay True rather than its impact.

“I know this is a project that has the potential of reaching the world, but my focus is a lot more centered than that,” Noah said. “It’s really on the young folks pushing their growth edges, finding out what inspires them, finding avenues to build coalitions with, holding elected officials accountable. You know, really, really, really providing the opportunity for them to nourish who they are.”

Check out a teaser for the documentary series, here. 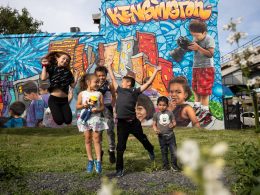 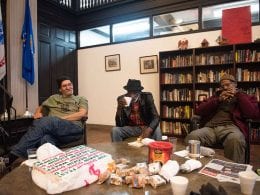 Three days every week, the veterans of Hancock Manor gather for coffee around a table in the house’s…
byErin Blewett
88 shares
88
0
0
0 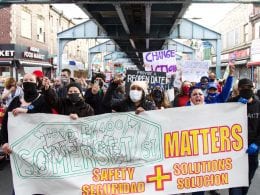